I just opened my sixth 12 pack of cards on Rising Star - my fav game by a long shot !

Todays opening gave above average skill and IM (in both cases my highest ever), low fans, luck (my lowest ever), and uniques (my lowest ever) and low guitar skill compared to an average 12 pack opening for me ! And I didnt get any epics. The table below lists all of the cards I got - rares with fans are in yellow, and the orange denotes cards with guitar skill (thats the lessons I use). 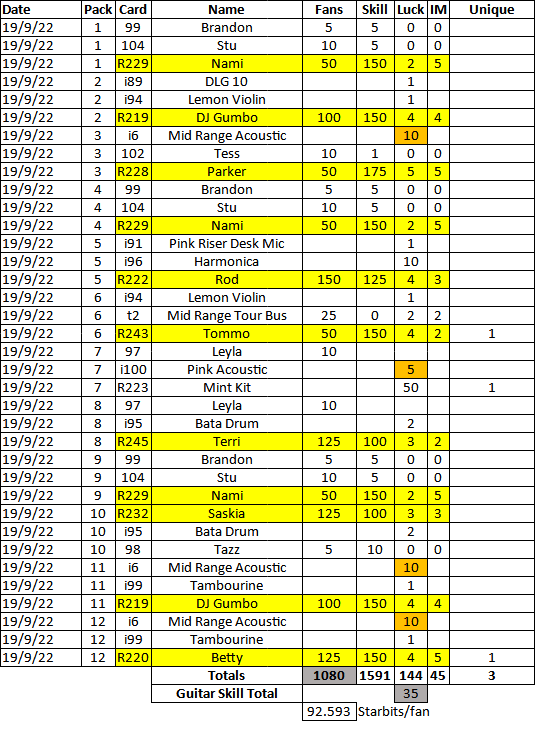 By comparison to RSG fam, to buy the same amount of fans and guitar skill today I would have paid 73996 starbits, so I've over paid - but opening a 12 packs is the funnest thing ever, so I will continue to do it !!! I've kept a track of my card stats from all of my pack openings, as per the following table:

You can see todays pack in yellow, and then the totals and average at the bottom. So my average for fans is running at 68.14 starbits/fan, which is actually higher than what I could have gotten on RSG fam today (66.6 starbits/fan), but its close enough that I'm happy to keep buying 12 packs in comparison to buying individual cards at best price.

The table above shows my game stats summary, and compares to after previous pack openings, although player rank is not yet updated (it only updates once per day). So steadily making progress - so cant complain.

Well thats my 12 pack opening excitement over for today - and I'm looking forward to the next pack already ! !

Great progress. You are flying along. !PGM

Many thanks - the millionaires card makes a huge difference. It allows you to get 12 packs more readily, ad that in turn boosts everything.
!PGM

Congratulations @hoosie! You have completed the following achievement on the Hive blockchain and have been rewarded with new badge(s):

Submit
0.00 JAHM
Reply
[-]
risingstargame  14 days ago
Thank you for voting for our proposal
VOTE HERE

This post has been manually curated by Rising Star Game

The NFT based music career game built on HIVE
!PIZZA

You can now send $PIZZA tips in Discord via tip.cc!